Fascinated by the energy of Hip Hop music, Hamburg (Germany) based Deep House DJ/Producer CRAM bought his first turntables at the age of 15 and immediately started djing. Still underage at the time of his debut release, his mother had to sign his first record contract with the popular German Hip Hop label "Yo Mama Records“. CRAM´s love for electronic music started in the early 90ies, when he fell under the influence of the blossoming and truly exciting electronic movements of this time.

CRAM is a skilled
and passionate
electronic music artist

Ever since CRAM has been exploring, developing and shaping his personal blend of House Music. CRAM is a busy producer of original music and also mixes and masters the work of other acclaimed artists. His own productions have been supported by some of the biggest players in today´s electronic music scene and several of his tracks have entered high positions in the Beatport charts, the Traxsource charts and the DCC (German Club Charts). His single “Compose You A Tune” has been in the DCC for ten weeks, which is the longest period possible and the official video for his single "Make Me Feel" has gained 95.000+ views on YouTube.

His DJ career has taken him to some of Germany´s most respected festivals and clubs and his extended sets have earned him a flawless reputation in the scene. He is hosting a monthly radio show on the UK based radio station Deepvibes Radio and on Canada based DE Radio and holds a bi-monthly DJ residency at Hamburg´s Mandalay club and a monthly residency at Hamburg´s Hoch3. CRAM is a skilled and passionate electronic music artist you should definitely pay attention to. 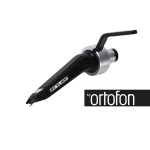 This really is a quality turntable!
[…] The built-in Serato drum and performance pads are great for DJs that use Serato. Its manufacturing is great and parts like RCA cables or needle illumination that get broken in club-life all the time can easily be replace by new ones. [...] The RP-8000 is definitely a great and state of the art turntable which will easily become a club standart for vinylists and Serato users.