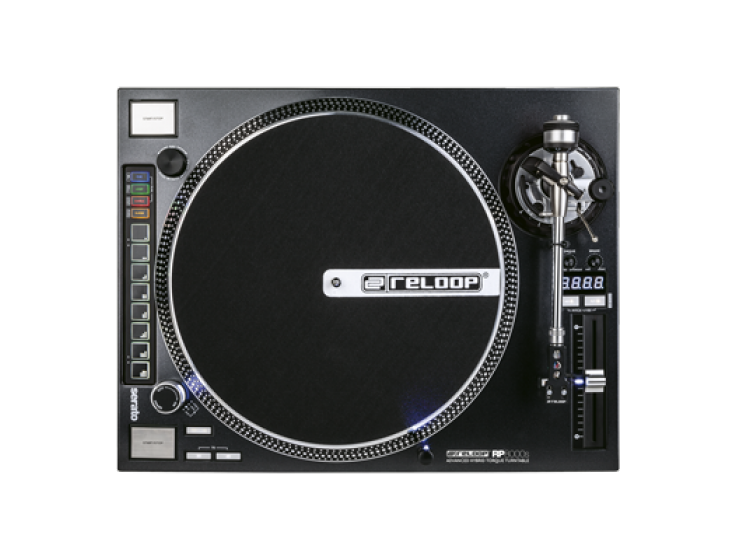 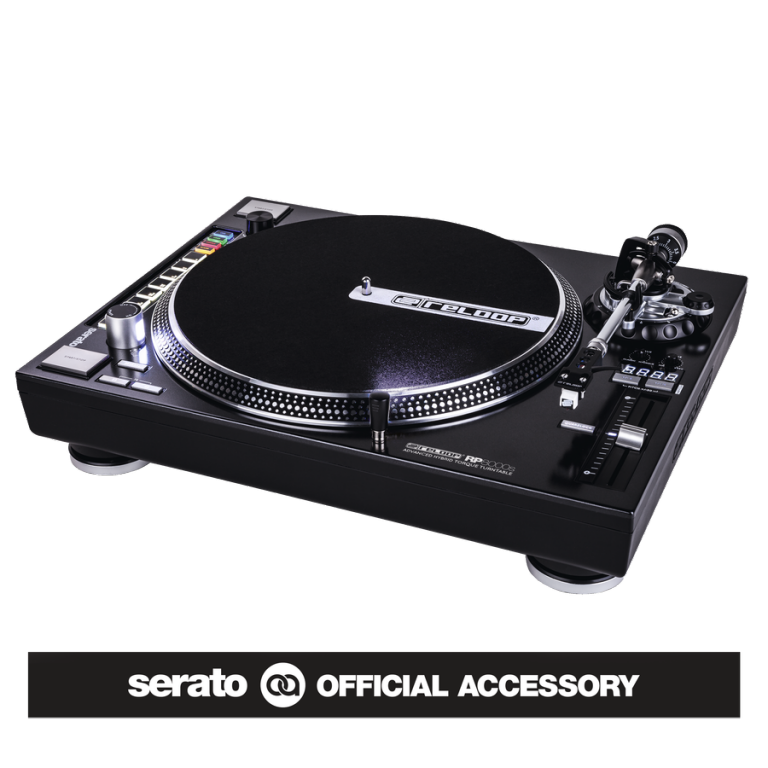 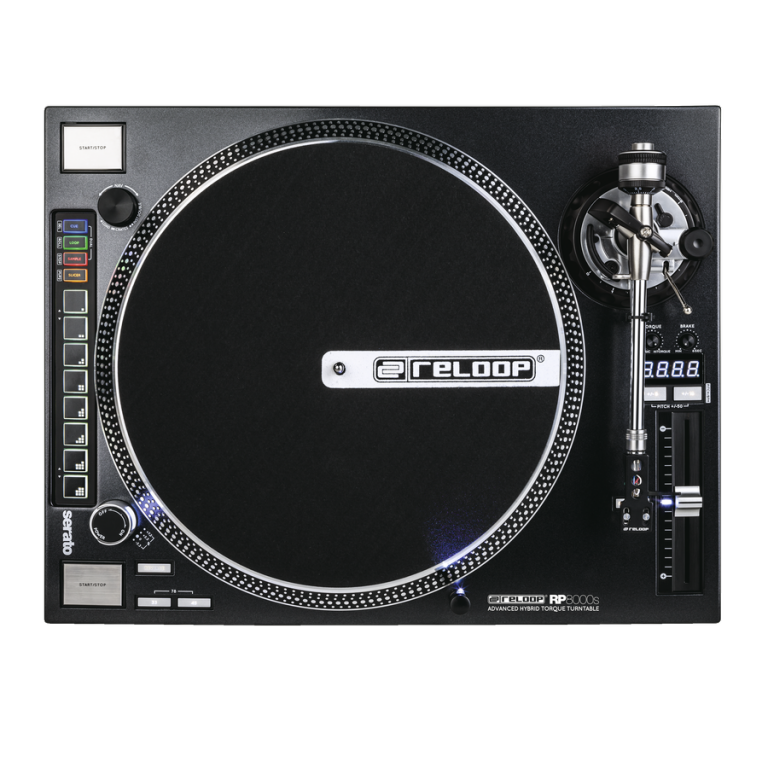 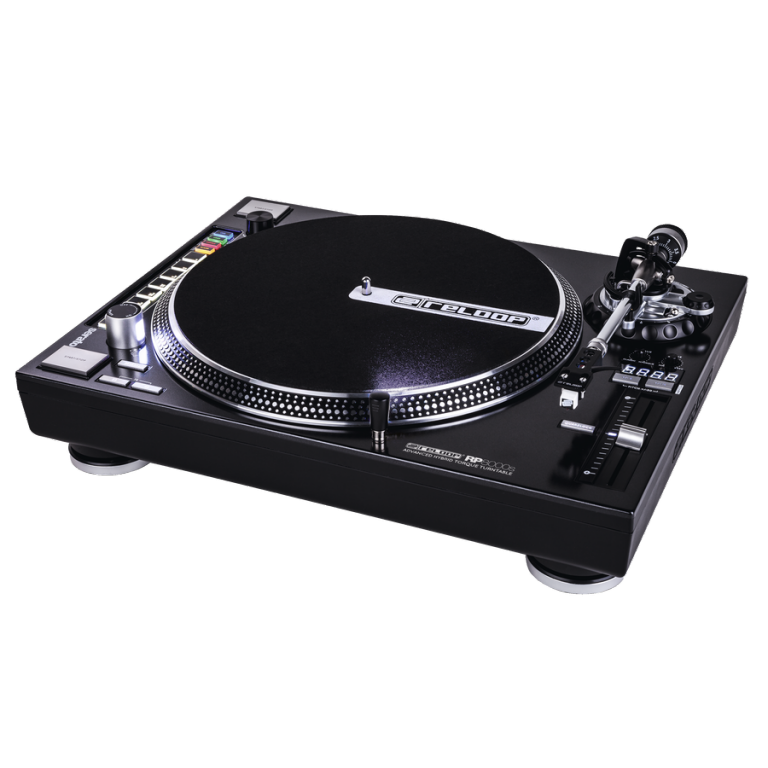 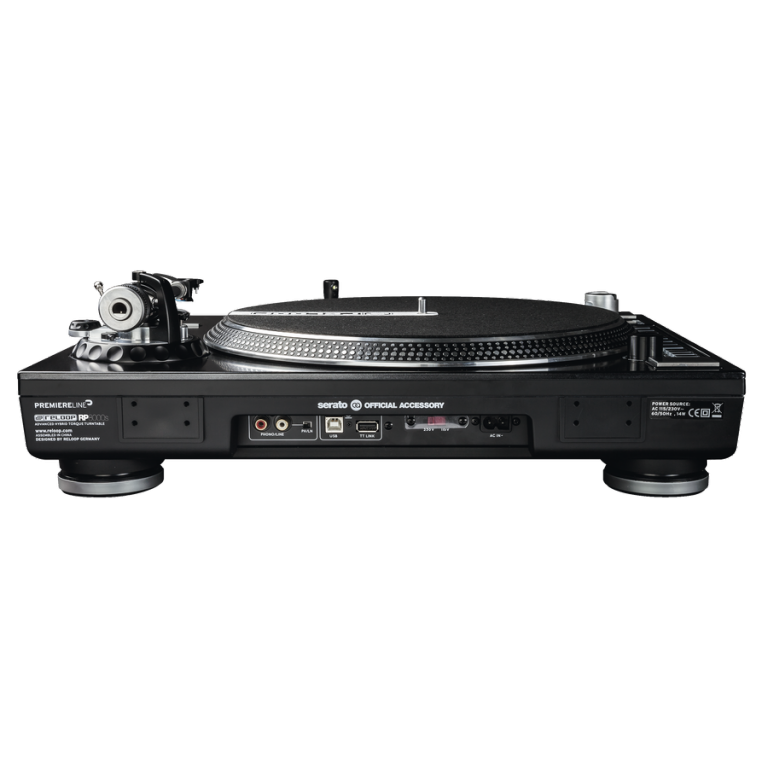 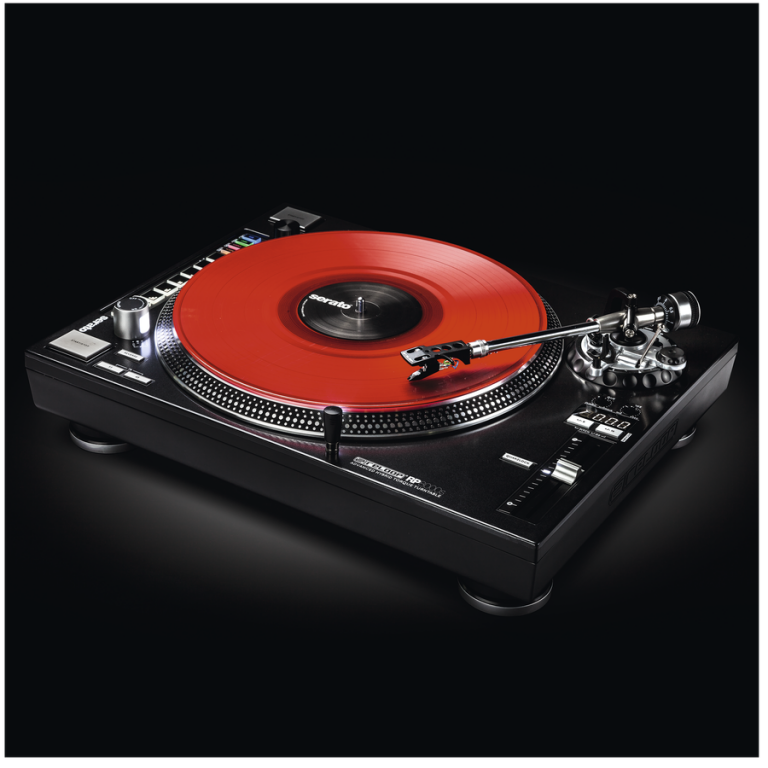 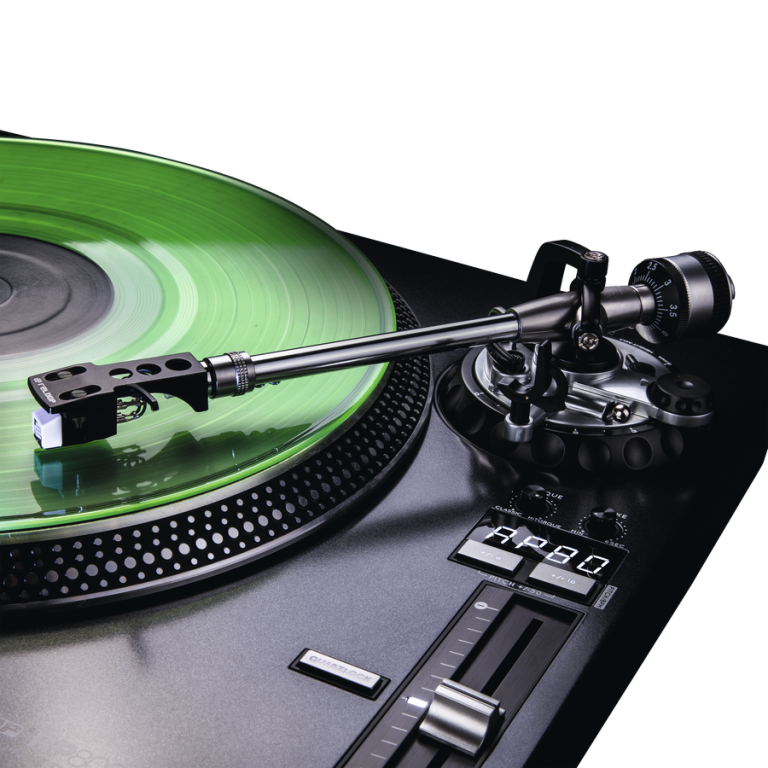 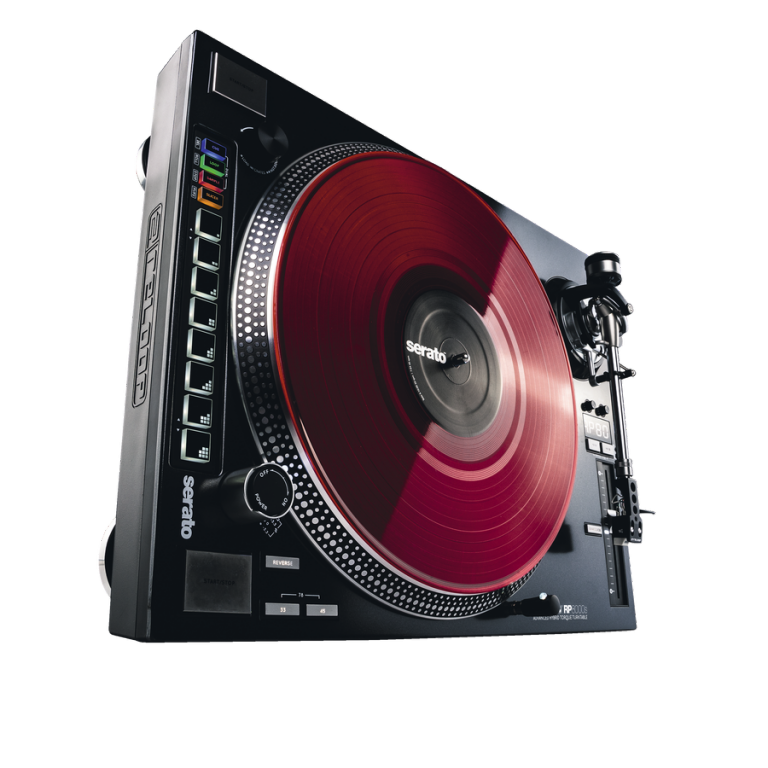 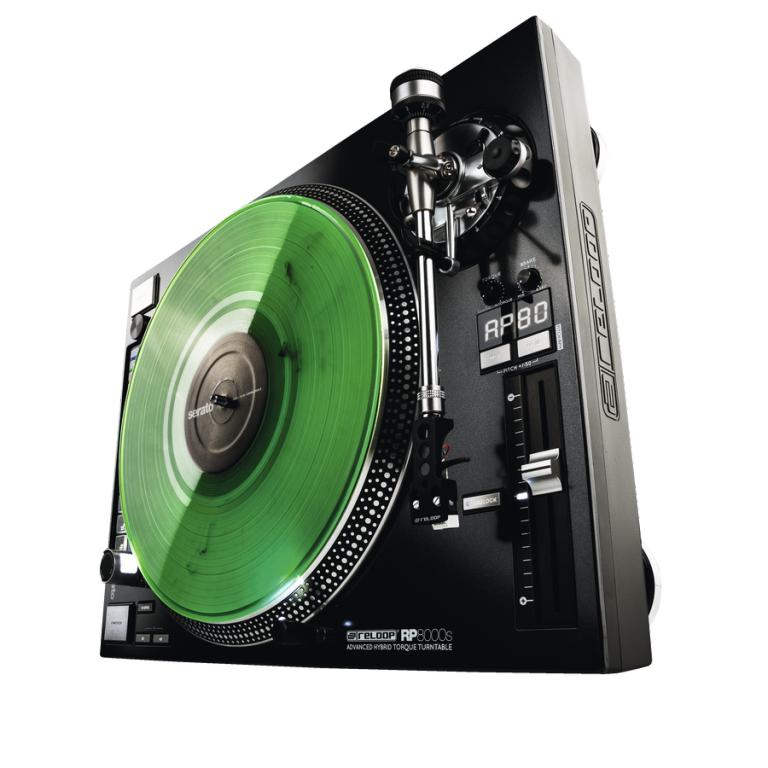 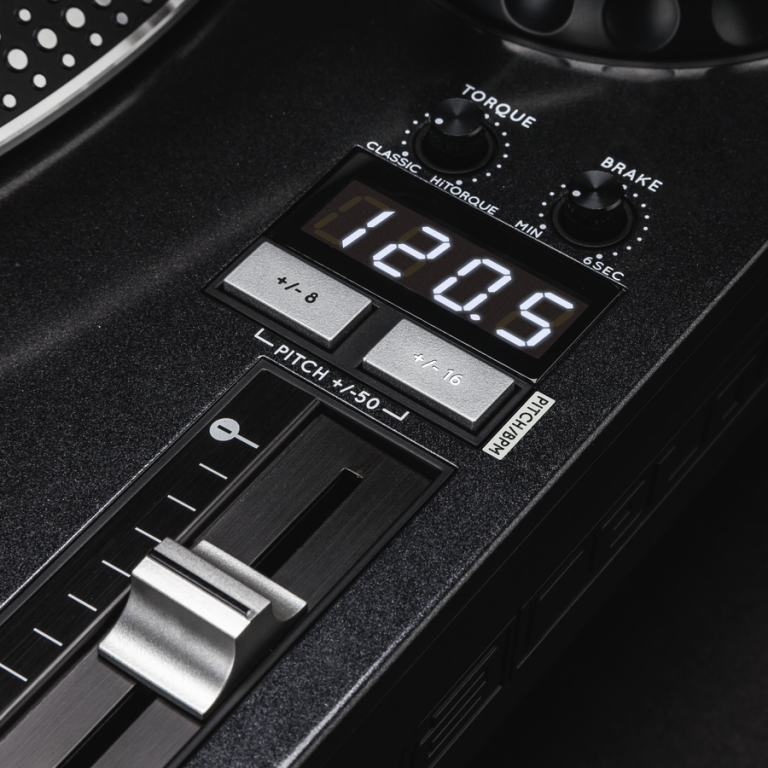 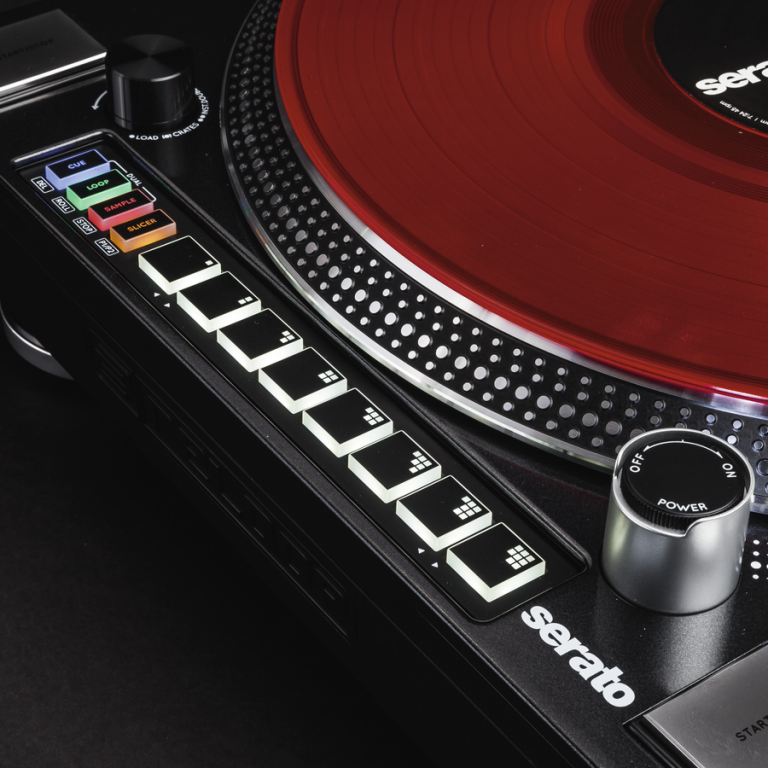 
This Product is discontinued. 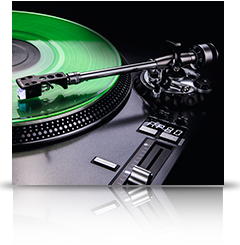 Reloop has listened to the wishes of turntablists and has therefore produced a dedicated version of the RP-8000 with a straight skip proof tone arm. Perfect and skip proof tracking is guaranteed allowing excessive scratching. We recommend using a headshell system such as the Reloop OM-GT. The Reloop RP-8000 Straight combines modern DJ technology in an advanced turntable. This hybrid high torque turntable does the balancing act between approved direct drive technology and a digital control section for your DJ software. The RP-8000 Straight is able to communicate with any midi compatible DJ software - an additional modular controller is not necessary anymore. Serato Scratch Live mappings are also available with which the worldwide most popular and stable DVS system can be controlled. With the Trax encoder it is possible to scroll through your playlists and comfortably load tracks onto the decks. 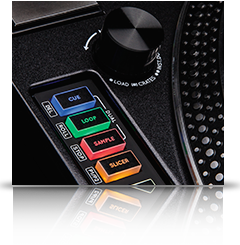 The RP8000 is taken into the exclusive "Official Serato Accessory" family, becoming the first ever Serato-supported turntable on the market. Use the RP8000 as part of your DVS set up with seamless plug and play integration allowing for previously unimagined creative possibilities. The MIDI control strip is now fully pre-mapped, offering all the trigger action you could need thanks to the 4 combinable performance modes - Cue, Loop, Sample and Slicer. The RP-8000 Straight disposes of 4 combinable performance modes. This way creative features are available such as access to 8 hot cue points. This means whole new possibilities for beat juggling. As the 8 drum pads are also multi-functional, loops can also be set and triggered. Even access to sample decks is very easy with the RP-8000 Straight. A further bank is available for slicer mode for cutting and remixing your tracks on the fly. RP-8000 firmware and software update - now better than ever!

Thanks to the latest firmware update, the RP-8000 Straight's technical abilities are further enhanced. In Serato DJ 1.7 it is now possible to display the current BPM of a track on the pitch display. This way you can sync your tracks directly at the turntable. Further treats: Global sampler volume can be adjusted via the Trax Encoder, looped slicer mode and loop shift are now available. This way drum rolls and instant effects can be controlled - various presets can be downloaded from the product website. The Dual Performance mode is especially clever: when two modes, such as cue and loop, are pressed simultaneously, the first 4 trigger buttons are assigned to cue and the other 4 buttons are assigned to loop mode. The Turntable Link Mode is also quite smart: via USB up to 4 turntables can be linked. The single devices assign themselves automatically and consecutively to the next deck - this way only one turntable has to be connected via USB to your PC/Mac. Besides the indestructible and sturdy construction, the turntable does not only cope with the hardest club surroundings, its technical features are as powerful: an ultra powerful, quartz driven direct drive with precise even speed and digital correction emphasizes the Reloop RP-8000 Straight's class. The high-resolution pitch (+/- 8%, +/- 16% and +/- 50 %) with a resolution of 0.02% is shown on the LCD and facilitates exact beat matching with long mixes. Sophisticated and fast turntablism showcases can also be realized without a problem, thanks to the additional start/stop button for vertical positioning and a variable torque from "Classic" to "HiTorque". More variety in the mix: with the reverse button and an adjustable stop time from 0.2 to 6 seconds, individual and creative impulses can be set with the RP-8000 Straight. As the turntable is equipped with a line/phono switch, it can even be connected directly to line inputs of mixers or amps - grounding not necessary. Reloop RP-8000 Straight - next generation turntable controller. Impact of stylus, record and tone arm remain not taken into account.

These are best-looking turntables in the market right now. The MIDI control is a great design adition to current turntables [...] the Reloop RP-8000 turntable is a great improvement and will surely carve its own place among the dopest turntables.

"The RP-8000 is the post-controller revolution deck that people have been waiting for. [...] the Reloop RP-8000 is currently the most interesting and capable turntable on the market."

"[...] the new Reloop RP-8000 may turn out to be what many DVS users have been waiting for [...] this Midi/analogue hybrid unit looks faithful enough to the classic Technics design to instantly feel “right”[...]"

PREVIEW: This release is one of the bolder advances in turntable tech we’ve seen in a number of years.

Overall, they're built well, and we are confident they are the best built turntable currently on the market.

Reloop’s RP-8000 is probably the most powerful turntable currently on the market. After playing with it for a few hours, we fell in love with the streamlined design and ease of use when triggering cues, loops, and samples.

This is the turntable I would purchase in a second.

Statement: Can't get excited for Technics turntables anymore after owning the Reloop RP-8000's. The motor is so much stronger that it makes me not like using 1200s at all anymore. Plus the +/-50 digital pitch read out is a necessity for me now. All you guys getting hyped up about outdated technology when you could be headed into the future.