Marc Stretch has been called a lot of different things. A visionary. A full time B-Boy. A single-minded party cyborg sent from the future. As the Bo Jackson of party-rocking, he flexes skill, both on the microphone AND the turntables. A Golden fingered maestro, with the ability to singe-handedly take a party from insipid (Google it), to incredible. With over 10 years of club, event and tour DJ experience, you will be hard pressed to find a harder working entertainer. Entering the independent music fray in 1997, Marc Stretch co-created the underground hip hop classic album, Kidnapper Van: Beats to Rock While Bike Stealing, as one third of the sexually charged, Foreign Legion. After years of writing, recording and touring, he finally was able to take on the true apple of his musical eye, DJing. He soon became a fixture at local venues and held down numerous residencies.

Enter DJs Malachi, Megablack, D-Sharp, Fuse, and Styles. The Vinyl Bros DJ Crew was born. A collective of Bay Area DJs whose influence has stretched across the world and resulted in many a good outfit, being turned into a sweaty mess.

As the chocolate sauce in the musical sundae that is, The Ultimate Handsomes (along with DJ Flip aka Minty Vanilla), Stretch lends golden tones, and god-like energy to their performances. Quotes such as, “I feel like somebody touched me in a very inappropriate way… and I LOVED it” and “I’ve never been so sweaty” are common place when their names are on a flyer.

If you feel like you really need to get out and dance away your blues, merely find the nearest Marc Stretch function and lie to your boyfriend about where you are going. 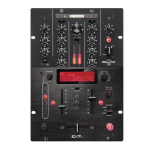