...This beautiful creature stalks her prey at night. Music is her weapon and beats, her bullets. Trumpet stabs and drum kicks for close-quarters combat. Juliet Sikora is going in for the kill...

Elsewhere, you would probably need to jump headfirst off a bridge to experience such an adrenalin rush. But when this young lady is behind the decks, the rush is greater. Don't let her good looks fool you, because she still knows how to control an angry mob. With a flick of the wrist she spins her first disc. The crowd roars in unison and are instantly under her spell. It’s going to be another long night.

Born in Strzelce Opolskie in Poland, Juliet has always had a passion for music. She learned how to play the piano at an early age and developed a taste for the electronic side of music while she was still in her teens. After leaving school she took up DJ-ing, organized her own events and hoped to make a career in music, be it behind the scenes or in the limelight. After she obtained a degree in Event Management, it looked like she could either. From Berlin to Miami, club to club and long sessions in the recording studio - This girl never stops. How she even finds time to fit in her day job at a renowned record label, nobody knows. But she does. And like everything else in her life, she does it with a passion that is second to none.

This passion is also reflected in her music. After teaming up with Tube & Berger for her first single: ‘Together Now’ released on Opaque Music, she took the German club scene by storm. Gigging at the Loveparade, Zuhouse Club and the legendary Cocoon Club. She went on to produce her own single and released the globally acclaimed ‘Turkish Delight’. This release brought her international fame and a huge fan base with it. Offers started rolling in from all over the world: Istanbul, Miami, London, Berlin, Amsterdam. No matter where she played, she rocked the clubs with her amazing blend of Balearic Deep / Tech House. A lot of remix work followed her fame and the likes of Massimo Santucci, Fuzzy Hair and Cerux came knocking at her door. New productions are on the way and even Tube " Berger have hooked up with her again on a new project called IT BEGAN IN AFRICA.

The project was published to support the children in need of help in Africa on their label Kittball Records, which they founded in 2006 and, since early 2010 she collaborate with their friends Tube & Berger. She’s busy in the studio right now putting the finishing touches to her latest number, which will be released this year. Her new release called “Fuk ur money” is out now and it looks like this will be a good start into 2011. All in all, this girl is worth looking out for. Be it for her good looks, or her good taste in music…You never know, she might even be playing in a club near you this weekend! 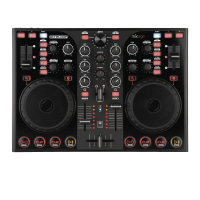 Juliet Sikora about the Mixage:

Mixage is a totally care-free package. I was astonished by Mixage's easy handling and good manufacturing. Even turning on this device makes a lot of fun; handling the cue points as well as operating the effects is easy, well-arranged and versatile. Compared to other equivalent products Mixage can be acclaimed in equal measure and it is by all means an alternative. The cost/performance ratio is right. The only little disadvantage is the device's weight.