Born in Guatemala City, Guatemala & raised in the City of Champions, Inglewood CA. IFTW has been sharpening his musical arsenal since the early 90's. Influenced by a plethora of genres, he has rocked all types of crowds throughout Southern California since the mid 90's and broke out to rock across the US in 2001

He has also earned many accolades throughout his yeas as a DJ. Crowned King Of LA Champion in 2007, 2 time USA DMC Champion & he is the reigning DMC World Supremacy Champion. 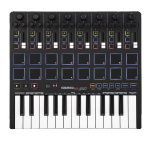