A stylistically diverse DJ, combining a deep knowledge of music with an advanced technique of scratching and mixing. His DJ sets are characterized by a precise selection, changes, jugglins and rapid mixes. Protagonist of the sicilian black music scene for over 20 years, he has collaborated with various national and international hip hop groups such as Barile + Gheesa, Big Joe & Johnny Marsiglia, Stokka & MadBuddy, DJ Double S, Adriano Bono and participated in the creation of albums and mixtapes that have released in national circuit. His musical expertise in funk, soul, hip-hop and reggae - from their roots to the present day - all lend to create a live set that transverses many genres and always offers something different.

Italian champion and world finalist of Red Bull Thre3Style 2016 - the most impressive world DJ championship that every year gathers the best performers worldwide to offer an incredible showcase. Judge in the 2017 edition with Eskei83 and DJ Puffy.

Was the official DJ of Shakalab, a collective of reggae/hip-hop music, currently with their second album out now entitled "Duepuntozero" (2016), which follows their debut album entitled "Tutto Sbagliato" (2014). The group was constantly active with gigs around Italy, engaging in live shows and highly anticipated concerts.

In 2015, in collaboration with DJ Double S, he published "ComboKlat Mixtape", a selection that fuses hip-hop and reggae enriched by the participation of top names in the italian national reggae scene such as Sud Sound System, BoomDaBash, Mama Marjas, Brusco, and international artists such as Alborosie.

An avid collector and tireless digger of vinyl records. Guest of important events like Red Bull BC-ONE, Tour the Forst, Cici Film Festival, Sunrise Festival, PLAS, Salina Doc Festival, etc. and in some of the most important italian and international clubs.

Convinced that a DJ is a musician in every aspect, he thinks that music is made by people - not by musical instruments. Currently his sets go from classical sounds of Hip Hop and Reggae to more modern sound like Trap / FutureDancehall / Moombahton. Nah miss it! 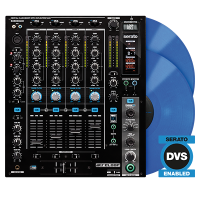 "One of my favorite set up, the perfect synthesis between analog and digital, new school and old school in the same set up!"

I have always thought of turntables being a musical instrument: the RP-8000 MK2 and its Platter Play made this a reality.

DJ DELTA ABOUT THE ELITE:

The Reloop Elite has everything a mixer should have: reliability, great sound and unlimited creative possibilities!