One of the best & most well rounded DJ’s in the world today, Chris Karns is a living legend on the turntables. He controls the crowd with a seamless blend of multi-genre party rocking, live production and warp speed turntable tricks. Chris’ resume speaks for itself: Headlining sets in over 50 U.S. cities and over 20 countries worldwide. 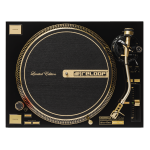 Chris Karns ABOUT THE SPIN:

Real faders??? This is by far my favorite portable turntable!

I have a pair at home (RP-8000s), and I think they are really great. I like the digital pitch that shows the BPM, it’s a really great innovation for a turntable. It has a stronger motor than the Technics 1200, sort of the industry standard, so I can do more musical things without the notes bending and sliding around.
Can't get excited for Technics turntables anymore after owning the Reloop RP-8000's. The motor is so much stronger that it makes me not like using 1200s at all anymore. Plus the +/-50 digital pitch read out is a necessity for me now. All you guys getting hyped up about outdated technology when you could be headed into the future.