DJing is about playing other people’s music, and production is about making that music. Somewhere in between is the performing art of finger drumming, where snippets of tracks are carefully crafted into a full set. Carl does this in great style using his amazing skills by uniquely blending, chopping and creating tunes. The result? Eye catching, ear pleasing sets in his skillful style.

With a number of live shows in clubs, product demos and showcases for top companies in the DJ/studio equipment industry all over the Europe, he became a specialist in the field of finger drumming and took the art of live performances to the next level.

The milestone for Carl was collaboration with Toolroom Records back in 2013 (Toolroom TEN campaign) when he gained a very respectable fan-base including the likes of artists such as legendary Mark Knight, D-Ramirez, Doorly as well as R3hab, Quintino, TJR, and many more. 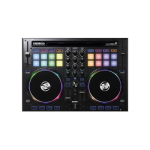 Well-built, tightly integrated with the software, great pads – the best DJ controller for iOS and Android on the market!